The team behind the much-praised 8 Octavia in Hayes Valley has set their sights on a new location right next door. Linden Partners is currently developing a new building along Octavia, between Page and Rose, which will house 26 studio, one- and two-bedroom units.

The developers recently closed on what was originally Parcel T, which became available following the demolition of the Central Freeway, and have released renderings of the new housing development.

In addition to the new condos and ground-floor retail, developers have plans for a street-level community beer hall as well, which developers are calling, “a living room for the neighborhood.” The beer hall concept could be a replacement for the SF Biergarten, which has found a temporary home down the street on Parcel L.

The five-story building includes condos on the upper four floors, with the first floor devoted to the beer hall and additional retail space. As far as the units themselves, they won’t be as spacious as other new construction buildings. The design team notes that to take better advantage of the space, the units will be “smaller and more economical.” Information about floor plans and square footage has not yet been released. 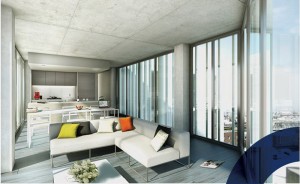 Other features include 13 underground parking spaces, 6 spots for car-shares, and street-level landscaped areas.

Like 8 Octavia, the new project will feature a distinctive façade. Edmonds+Lee, the team behind the design, said they incorporated a contemporary version of traditional Victorian Bay windows, but the building is certainly modern and will complement other buildings in the neighborhood.

Blocks from the Heart of Hayes Valley

Since the demolition of the Central Freeway, Hayes Valley has been a hot-bed of development, and it’s all centered in the heart of the neighborhood.

This building will be just a few blocks from Market Street, and a short walk to the Hayes Street corridor.  Cafes, shops and concert venues are all nearby, and there couldn’t be a more walkable part of the city. Plus, the San Francisco Symphony and Civic Center Plaza within walking distance, which adds to the urban feel of the neighborhood.