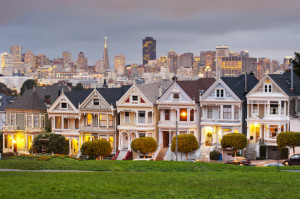 Twenty years ago, the thought of finding one of San Francisco’s ultra-chic corridors in Hayes Valley would have been considered absurd. Like New York City’s Times Square of old, the area, bordered by the Van Ness performing-arts district and the Western Addition around Laguna Street, was a seedy reminder for opera and symphony patrons of the city’s homeless and drug problems. But over the past two decades, Hayes Valley has developed into a haven for haute couture.

Where the terms “ladies of the street” and “gentlemen of the street” once identified those who conducted an illegal exchange of various earthly sins for money, today they refer to the street’s myriad window shoppers and restaurant-goers. Where the crack houses and tenements once stood, now there are trendy fashion boutiques, SoHo-style funky art galleries, high-end interior-decorating shops, top-notch restaurants and hip nightspots. The neighborhood is also home to the famous “painted ladies” that provide a post card perfect view of San Francisco.

The success of Hayes Valley’s current commercial district was boosted in part by the destruction caused by the 1989 earthquake to the Central Freeway, which had entrance ramps on Franklin and Gough streets. The freeway was an eyesore and created noise pollution that kept businesses and foot traffic away. Not long after that part of the freeway came down, the community began to transform, and commerce moved in.