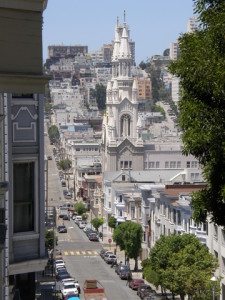 North Beach is that rare thing — a neighborhood that manages to be a perennial hit with tourists, and also to remain beloved by San Franciscans. It’s best known as San Francisco’s Little Italy, with its high density of check-clothed ristorantes, caffes and Old World delicatessens. It’s also a popular pilgrimage for fans of the Beat movement seeking the old haunts of Kerouac and Ginsberg. However, North Beach is no relic, and it has much to offer beyond pasta and poetry.

This vital neighborhood is home to some of the liveliest nightclubs and bars in town. Small boutiques carrying handmade clothing and imported goods dot the streets, particularly on upper Grant Avenue. Though Italian restaurants appear to dominate the dining scene, there are plenty of other good spots to try once you’ve had your fill of lasagna, with menus featuring Japanese, French and contemporary fusion cuisine. City Lights, original publisher of Allen Ginsberg’s “Howl,” is still one of the best bookstores in San Francisco, and founder Lawrence Ferlinghetti can sometimes be seen strolling the neighborhood. Then there’s Broadway, buzzing with neon and strip clubs and adding an incongruous dash of sleaze to all the culture and history.

Part of the old Barbary Coast, North Beach is steeped in the past — Grant Avenue itself is the oldest street in San Francisco. In the early days, North Point docks served as a gateway for immigrants from South America, Europe and the Australian penal colonies. It wasn’t until the late 1800s that thousands of Italians made the area their stronghold and turned it into the local Latin Quarter. The Italian-American community can also be credited in part with protecting the neighborhood against the fire that swept the city after the 1906 earthquake. According to legend, some enterprising residents cracked open the barrels of red wine in their cellars and saved their houses by draping them with wine-soaked blankets. In more recent history, North Beach has produced some notable people, including baseball great Joe DiMaggio, who moved there at the age of one and grew up in a flat at Valparaiso and Taylor. Former San Francisco mayor Joseph Alioto was born in North Beach.