On Potrero Hill, you can relax in brilliant sunshine while watching fog engulf the rest of the city. Bounded roughly by 16th, Third and Cesar Chavez streets and Potrero Avenue, the neighborhood is relatively isolated by freeways and large tracts of industrial landscape, giving Potrero Hill its own pace and a feeling of distance from “San Francisco.”

The neighborhood’s origins extend back at least to an 1835 land grant to Don Francisco de Haro to graze Mission Dolores’s cattle at the potrero nuevo (“new pasture”). Gold rush squatters started pushing the herd aside and began the first of many waves of urbanization and immigration: Scots in the 1860s, then Irish, Chinese, Russians, Mexicans and finally African-American Southerners in the 1940s, building battleships at the bustling wartime shipyards.

While families lived on the hill, flatland manufac 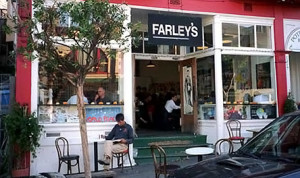 turing by firms like U.S. Steel, the Union Iron Works, the Western Sugar Refinery, Bethlehem Shipbuilding Co. and American Can Co., among others, ensured that the area remained largely industrial through most of the 20th century. But a combination of de-industrialization and the late-1990s Internet boom began driving the conversion of factories and warehouses into housing or offices.
Today 20th and 18th are the popular shopping and restaurant streets.  These streets offer great views of the bay and the city skyline.  Some homes in on the Potrero Hill offer breathtaking views.