Preparing Your Fireplace for Santa 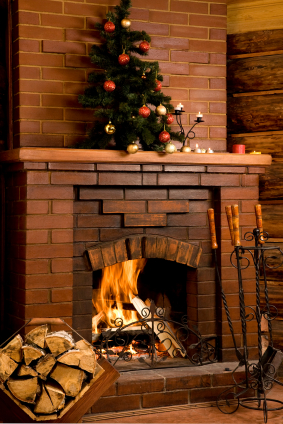 It’s getting close to the time of year when Santa will be using your chimney not to mention there’s a chill in the air, and one of the nicest parts about cold weather is sitting by a blazing fire. Most likely, you haven’t used your fireplace since February. It’s unwise to just toss in some wood and a match without any proper maintenance beforehand, so what can you do now to ensure you’re ready for cozy fireside nights when the weather cools?

The average number of annual U.S. home fires caused by fireplace, chimney, and chimney connectors between 2003 and 2005 was 25,100, and the average costs for those fires was $126.1 million, based on the most recent statistics from the Chimney Safety Institute of America (CSIA). That’s roughly $5,024 in damage per home.

Annual chimney maintenance removes flammable creosote, the major cause of chimney fires, and identifies other performance problems. There are basically three levels of inspection. Read on to see which one is a fit for you and your fireplace.

1. Level One: This is a visual check with typically no roof climbing—or dancing to musical numbers a la Mary Poppins—involved. The inspector comes to your house with a flashlight, looks for damage, obstructions, creosote build-up, and soot, and tells you if you need a sweep. If so, he’ll grab his brushes, extension poles, and vacuum, and do it on the spot.

A level one typically runs about $125. Add a sweep, and you’re talking another $80, or about $205 for both services, according to CSIA.

2. Level Two: If you’ve experienced a dramatic weather event, like a tornado, hurricane or earthquake or if you’ve made a major change to your fireplace consider getting this level of inspection. This will include what you got with a level one, plus a visit to the roof, attic, and crawl space in search of disrepair. It concludes with a sweep, if necessary, and information on what repair is needed. The price will depend on the situation.

3. Level Three: This is typically only done after a chimney fire, because it’s practically a demolition. The chimney is torn down to be thoroughly inspected, and then rebuilt. Cost will vary.

In addition to an annual inspection, here are some tips for maintaining the health of your fireplace and chimney:

• Only burn dry, cured wood—logs that have been split, stacked, and dried for eight to 12 months. Cover your log pile on top, but leave the sides open for air flow. Hardwoods such as hickory, white oak, beech, sugar maple, and white ash burn the longest, though dry firewood is more important than the species. Less dense woods like spruce or white pine burn well if sufficiently dry, but you’ll need to add more wood to your fire more often, according to CSIA

• Only burn wood! Crates, lumber, construction scraps, painted wood, or other treated wood releases chemicals into your home, compromising your air quality. Log starters are fine for getting your fire going, but they burn very hot; generally only use one at a time.

• Remember to close your damper when you’re not using the fireplace, and to open it when you are!

• Have a chimney cap installed to prevent objects, rain, and snow from falling into your chimney and to reduce downdrafts. The caps have side vents so smoke escapes. A chimney sweep usually provides and can install a stainless steel cap, which is better than a galvanized metal one available at most home improvement retailers because it won’t rust,

• Replace a poorly sealing damper to prevent heat loss, or get a top-mounted damper that can also function as a rain cap.

• Install carbon monoxide detectors and smoke detectors in your house—near the fireplace as well as in bedrooms.

• Build your fire slowly, adding more wood as it heats and keeping your damper completely open to increase draw in the early stages. Burn the fire hot, at least occasionally—with the damper all the way open to help prevent smoke from lingering in the fireplace and creosote from developing.

• Get your chimney cleaned twice a year, if you burn more than 4 cords of wood annually.

Now, make some hot chocolate, gather a book or guitar, and enjoy the sweet crackle of a fire.