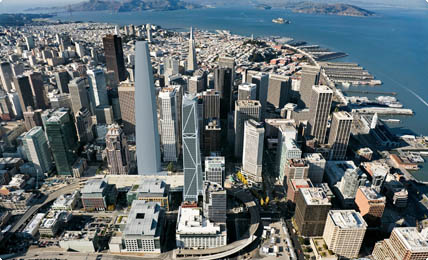 The sparkling Transbay Transit Terminal, which has been dubbed the “Grand Central Station of the West,” is transforming a huge area in San Francisco’s SoMa neighborhood. Just south of Mission Street, between Second and Beale streets, the Terminal will be a state-of-the-art facility, and around the transit complex construction is booming.

In fact, there’s intense interest in all the new real estate here. Recently, Salesforce.com inked a blockbuster lease agreement for the Transbay Tower. It was city’s largest lease agreement ever and will include naming rights. And the residential buildings sprouting around the terminal are already courting interested buyers.

But with so many different buildings popping up, each led by different developers and designed by a stable of all-star architects, it’s impossible to keep all the details straight. Of the 12 parcels, or blocks, that have been zoned residential, four are under construction and one is already online, and plans are already in moving forward for a handful of high-rise office buildings, as well. Here’s what’s in store:

With increased height limits, the Transbay development will attract quite a few businesses. An additional 3 million square feet of office and commercial space are planned, as well as more than 100,000 square feet of retail.

The Transbay project is one of the most important for San Francisco’s already strapped housing stock. With plans for more than 2,500 new homes, the development is really all about created an entirely new downtown neighborhood.