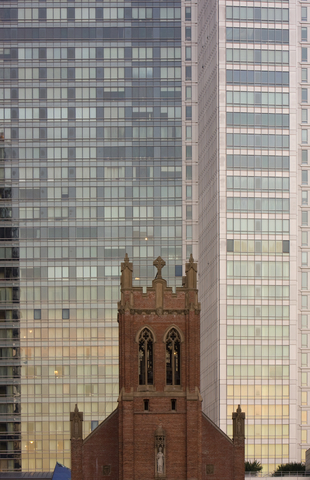 South of Market is a huge district, sprawling from the Embarcadero to Eleventh Street, between Market and Townsend. The neighborhood is a patchwork of warehouses, swanky nightspots, residential hotels, art spaces, loft apartments, furniture showrooms and high tech companies. Although a lot of building has gone on in recent years, it is still not densely developed. You can walk several desolate blocks before suddenly finding a hopping restaurant.
Most of the action can be found in three general areas: by South Park and the Giants ballpark, around the SF MOMA and Yerba Buena gardens, and over by Folsom and Eleventh Street. SoMa, as it’s known, sounds a little like a SoHo wannabe, and it does have a strong downtown vibe. However, the name has its roots in the old nickname “South of the Slot,” referring to its position on the “wrong side” of the Market Street cable car track when it was an industrial district of factories and Gold Rush immigrant workers.

These days the industry most associated with South of Market has to do with that other Gold Rush: the dot com boom. South Park is still abuzz from Internet companies and companies developed to service them. The grassy square is a nice place to walk your dog or eat a sandwich, and is bordered by several good shops and restaurants. In the summer the area gets more foot traffic as packs of Giants fans head for the ballpark. A handful of new restaurants have also opened to serve this crowd.

The area around Mission from Third Street to the Embarcadero is more well heeled, influenced by the nearby Financial District and conventions at the Moscone Center. Several of the city’s arts organizations are located here, including the SF MOMA, the Center for the Arts at Yerba Gardens and the California Historical Society. It has a bohemian undercurrent, with the museums, several independent bookstores, the line of artsy clubbers waiting to get into the galleries and clubs 111, and students from the Academy of Art.  This area is also home to the Millennium Tower, St. Regis, Infinity and several other residential projects that have brought empty nesters, young professionals and families to the area.

At First and Mission the new Transbay Terminal is being constructed.  This multi billion dollar project is going relocate the center of San Francisco to this area.  It will be the northern terminus for the California high speed rail connecting Los Angeles and San Francisco by train in just 3 hours.  Other area transit will connect too.  The terminal building itself with have a 4.5 acre park on the roof complete with amphitheater, jogging trails and children’s playground (click here to more info on the Transbay Terminal).